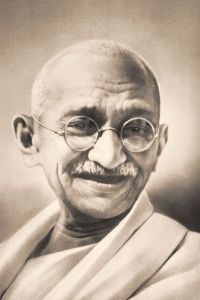 “Gandhi was inevitable. If humanity is to progress, Gandhi is inescapable. He lived, thought and acted, inspired by the vision of humanity evolving towards a world of peace and harmony. We may ignore Gandhi at our own risk.”

It was said where Gandhiji resided was the Capital of India. Mohandas Karamchand Gandhi called Mahatma “great soul” (the poet Rabindranath Tagore honoured with a Nobel price first called him that) inspired millions of Indians as a living example with his ascetic life in simplicity, kindness and love. Even today the image of the small and skinny man covered in a self weaved cotton blanket is a symbol of truth, non-violence and civil resistance and finds adoration and imitation. Gandhi's life story is full of courage, determination and religious willpower. His timeless message still holds true - to combat injustice and cruelty with the means of love and truth. His message can be used to solve today's social, political and ecological problems.

Gandhiji motivated masses and stood up against discrimination and suppression with three concepts that were the pillars of his philosophy: Satyagraha, Ahimsa and Brahmacharya.

Satyagraha - well known after Gandhi's numerous campaigns - means “strength through truth and love.” His thorough studies of the Bhagavad Gita and the Holy Bible led him to the conviction that humanity must always stand up against evil - turning the other cheek. For him non-operation with evil was just as important as co-operation with good.

To realize this principle he taught civil disobedience as a strategy in his speeches, essays, books and through his living example. With this Gandhiji did not mean to accept injustice but actively to stand up against it without violence. His method was freely to disregard the law and willingly serve the sentence. Vedanta philosophy teaches that Realization of the Truth is not at all possible without Ahimsa (Non-violence), and therefore, Ahimsa is the supreme Dharma (Duty). Mahatma practised the principle of non-violence towards all living beings, again as a living example - he was a strict vegetarian. In his work as a politician he expressed this by respecting all humans irrespective of gender, caste, nationality, race or religion. In particular this was expressed through the respect and kindness with which he treated his colonial oppressors.

The third pillar of his philosophy - Brahmacharya means Orientation to God and renouncement of worldly things.

“Believe in Truth, think Truth and live Truth. How-so-ever triumphant untruth may seem to be, it can never prevail against truth.”

For Gandhiji religion was nothing separate from day to day life. Life itself should be understood as a religion. “Life divorced from religion is not human life, it is animal life.” Gandhiji tried to realize and live this consciousness in the ashrams he founded in South Africa and India. As self-supplying communities his ashrams welcomed everybody as long as the rules of a simple and peaceful life were obeyed. “Whoever joins me must be ready to sleep on plain floor, wear simple clothes, get up early, live from undemanding nutrition and even clean his toilet.” 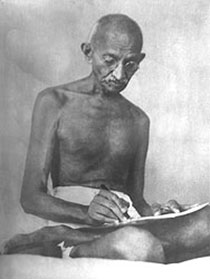 “To see the universal and all pervading spirit of truth, we must be able to love even the most miserable creature the same as we love ourselves. And that one, who strives for this goal, cannot venture to turn away from any possible area of life. Therefore the devotion to Truth brought me to politics; and I can say with all the modesty that those who say that religion doesn't have anything to do with politics don't know what the religion is.”

My Autobiography or The Story of My Experiments with Truth
M. K. Gandhi

Throughout many years of travelling Gandhiji taught self-help, inner and outer purity, and a respect towards all living beings, cultures and religions.

The same as drops of water make an ocean, so we, too, through friendship, become an ocean of friendliness. The shape of the world would indeed be transformed if all of us live in a spirit of love and amity with one another. Simple gestures became symbols throughout the world: fasting and praying were the two most powerful “weapons” of Mahatma because they peacefully united big crowds; and took the wind out of the sails of his opponents. A peaceful march, a handful of sea-salt and a spinning wheel turned out to be the powerful means to finally rock the empire.

Movement opposed to ignorance. Respect opposed to enduring acceptance. Lived love towards all living beings opposed to indifference and violence. Perhaps Mahatma Gandhi's greatest merit was actively to live non-violence, truth and faith. He did not avoid conflicts when it came to taking steps against deplorable state of affairs. “Life spent in service is the only fruitful life”.

“Non-violence is the greatest force at the disposal for mankind.” This message is the timeless essence of Gandhiji and one that can be applied to the problems humankind is facing in the 21st century. The apparently simple goal is to realize that every action of every single human being counts. When the inner lamp burns it illumines the whole world.