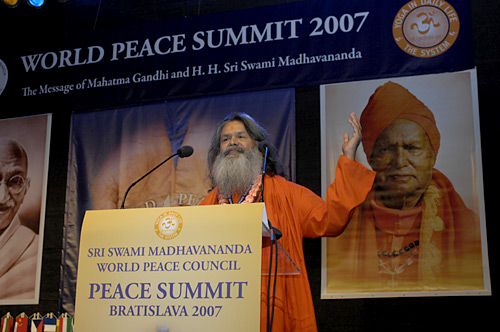 The 6th annual World Peace Summit under the auspices of the Sri Swami Madhavananda World Peace Council, in cooperation with the Slovak Yoga Union took place in Bratislava, on October 5-7. The World Peace Summits are an annual event that journey around the world to raise global awareness, as well as spiritual, social and political resolve to secure lasting world peace and to demonstrate mutual respect and understanding.

Many participants and dignitaries came from around the globe. The World Peace Summit, which coincides with the 100th anniversary of Mahama Gandhi’s Satyagraha movement opened with the lighting of peace candles, each candle being lit by a dignitary from a wide range of traditions and nationalities. The program continued with a welcome from the Mayor of Bratislava, and an introduction to the mission of the Sri Swami Madhavananda World Peace Council by Dr. Radha Lavicka.

The Ambassador of India to the Slovak Republic, Her Excellency Homai Saha, spoke about Gandhi’s message that the practice of “non-violence is not only for the Rishis and Saints, but for the common people as well.” Her Excellency also presented a greeting message from the Chief Minister of Rajasthan, Srimati Vasundara Raje to the audience.

Ramu Damodaran, from the United Nations, Chief of the Civil Society Outreach Division, invoked Gandhi quoting, “We only have 24 hours in each day which is not enough time for love. Where is the time to fight?” He spoke compellingly about the power of Yoga to change the hearts of individuals, and that Yoga could awaken a youthful attitude to effect generational change.

Rev. Tsu-Wei Zoe Chang, President of the United Nations Womens Guild, relayed the message that the emphasis on masculine energy has been one of the biggest contributors to conflict in our society, and conveyed the necessity of bringing out the feminine energy in world. The highlight of the day was His Holiness Vishwaguru Paramhans Swami Maheshwaranandaji, who was presented with a copy of a hand-written letter of Mahatma Gandhi, the only such document in the Slovak National Library’s possession.

His Holiness Swamiji spoke about the mind, saying that “mental pollution is the greatest cause of suffering and conflict in the world.” He continued by saying that “religions of the world should unite in the consciousness of God for this I have been working for the last 55 years” and that “until we have contentment in our hearts, we will never be happy.” He finished by reminding us that the mission of human life is to “know thyself.”

After lunch, the participants were treated to a rousing performance of traditional Indian music from Rajasthan. Following the performance, Naginbhai Neil Patel, representative of Yoga in Daily Life Wellington, reflected on Swamiji’s influence saying, “Swamiji has given people peace through the practice of Yoga in Daily Life but He has also taken us to the next level- He has given us hope for world peace.”

Ricaardoe Di Done, President of the Organization for the Protection of Children’s Rights, conveyed to the audience the vulnerability of children around the world. He stressed the importance of the connection between children and the environment asking, “If we have a healthy planet but do not provide children with the love they need to flourish, what kind of world will we have? On the other hand, if we provide children with the tools they need to be happy and healthy, but they do not have clean air to breathe, what have we actually accomplished?”

Monsignor David Cappo, Vicar General of the Archdiocese of Adelaide, Australia, and personal friend of Swamiji, gave a beautifully moving appeal for inter religious cooperation and dialogue. He reflected on his own tradition saying that “the Kingdom of God- where forgiveness and compassion abide and fear and hatred are no more- is not a fantasy but it is what we can become. It is what we are meant to be.” He appealed to all religious leaders to embrace their role in the effort for world peace by suggesting that leaders need to come together regularly to affirm their commonality and at the same time acknowledge their differences. “It is so harmful,” he said, “when we fear one another. We lose credibility in the eyes of the world and damage our ability to do good work.”

His Holiness Mahamandaleshwar Swami Niranjan Ananda Giri electrified the hall with his powerful message to the participants. He challenged the audience by saying that Holy Guruji and Swamiji have blessed us, bringing us the “peace Ganges” and that it was now up to us to keep it safe. “Rome was not built in a day, but it was built,” Therefore, he said, “World peace is not a one-day task but it is in your hands. It is possible but it needs self-determination, sacrifice and self-contentment.”

One after another, speakers took the stage to enlighten us about the environmental, political and social problems in the world today. Dr. Timi Ecimovic, an eminent climate change scientist, researcher and lecturer, reminded us simply and powerfully that “the world does not belong to us!”

Finally, after a day of inspirational presentations, the conference came to a close with Monsignor David Cappo reading the final outcome document from the 2007 World Peace Summit.

The final words came from His Holiness Swamiji saying, “The hall is vibrating with a very divine energy and the echo of this energy is world peace.” He left us with the sentiment that our participation in the conference today was “meditation in action.” 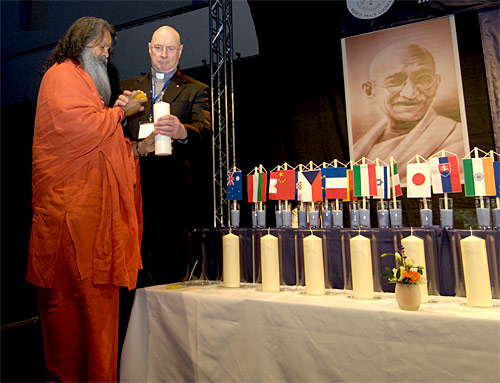 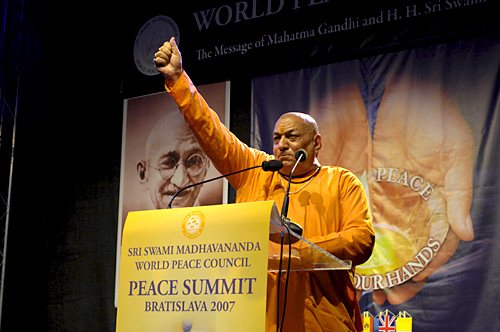 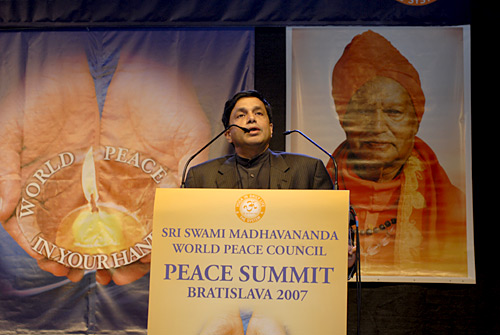 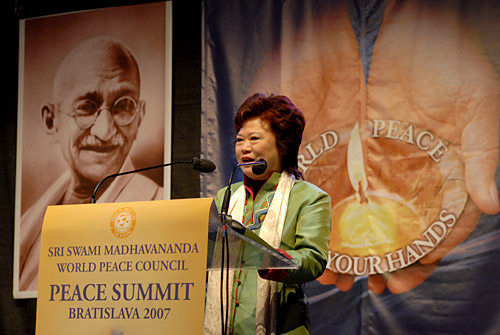 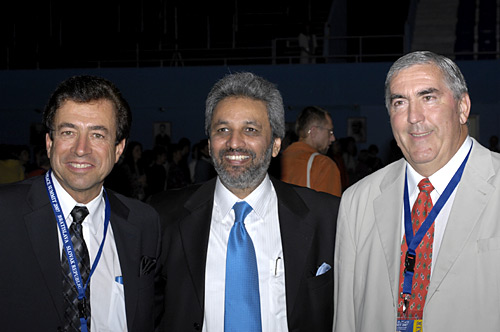 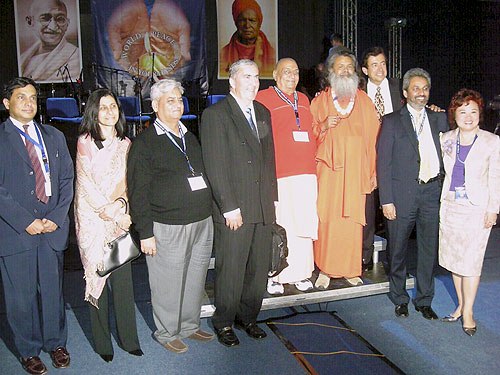 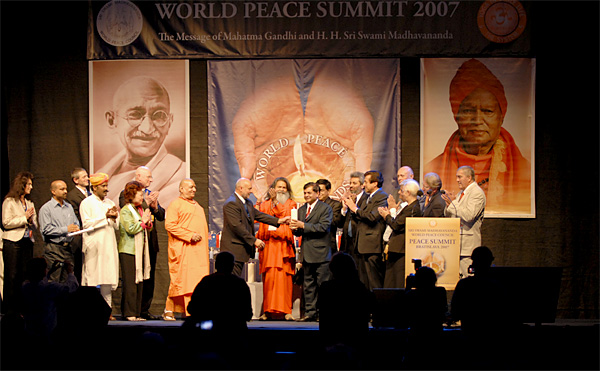 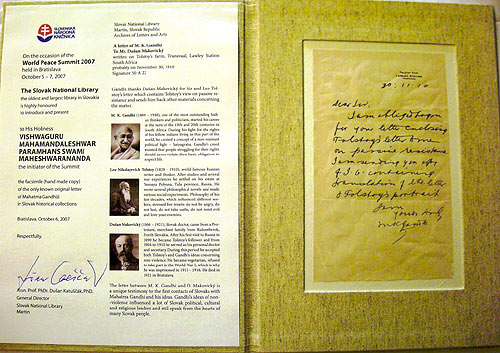 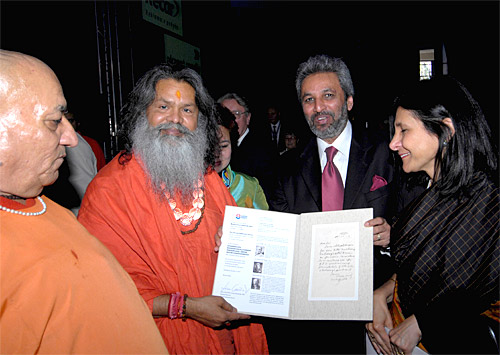 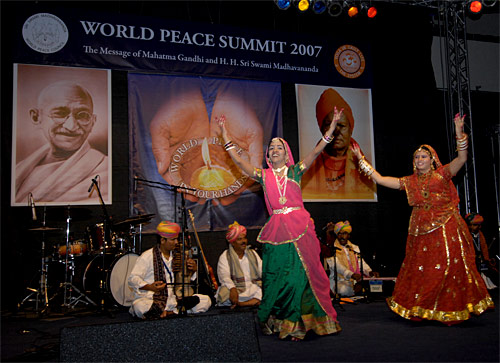 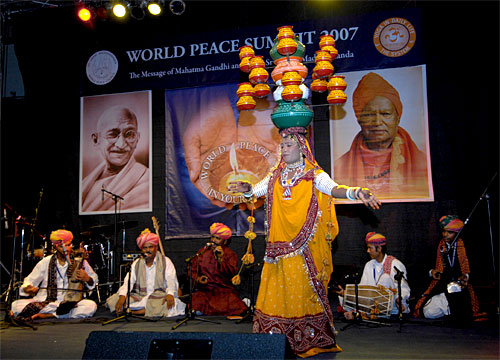 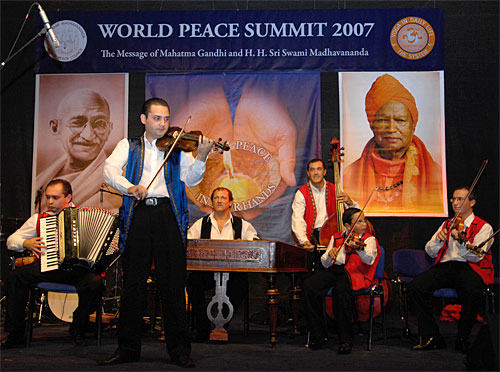 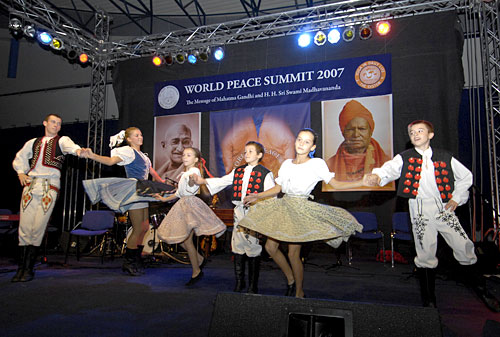 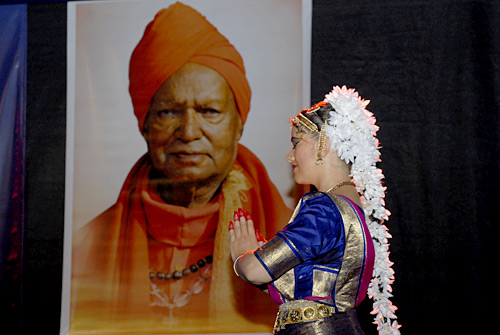