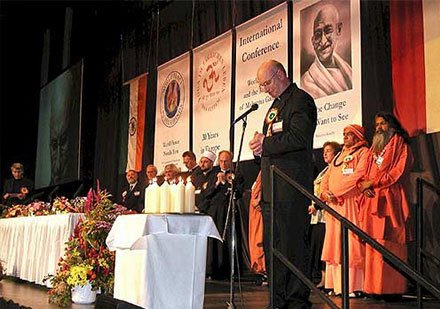 "We recognise the interconnectedness between the world of humans and the world of nature. Unless we care for the Earth and one another, we risk the destruction of ourselves and the diversity of life."

On October 5, 2002 the first International Conference of World Peace and the Message of Mahatma Gandhi took place in Vienna, Austria, initiated by Swamiji as one of his greatest contributions to these efforts. 2,000 participants attended from 40 countries, including ambassadors from 25 countries. It was an impressive event held to promote world peace through understanding, respect and tolerance between religions, cultures and nations. The conference focused on human rights, ethics and human values as the most valuable assets for world peace and sustainable development.