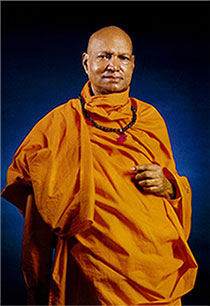 In this world sometimes we are fortunate to have among us rare persons whose very existence and spiritual strength ennoble the whole of humanity and all living beings. His Holiness Hindu Dharmsamrat Paramhans Sri Swami Madhavananda Puriji was one such person. He was one of the true spiritual leaders of our time and as the spiritual successor of Sri Mahaprabhuji he attained the blessed state of God-Realization through pure devotion and service to his Master. “Enter the kingdom of God through the gate of sacrifice” was his encouragement to all seekers of God, for the union with God is attained only when there is complete, unconditional surrender of the body, mind and soul.

His Holiness was born on 11 September 1923 and he lived at Sri Mahaprabhuji's side for more than 20 years, faithfully recording Mahaprabhuji's Bhajans and Satsangs throughout that time. We must be thankful to him that Sri Mahaprabhuji's wonderful songs and enlightening words were preserved. He wrote the biographies of Sri Mahaprabhuji and Sri Devpuriji that appear in the book entitled “Lila Amrit” . As an accomplished singer, he often expressed their teachings in the form of Bhajans. By setting a living example through his life of pure devotion to God, and service to all living beings, His Holiness is an inspiration to all seekers of the Truth.

He carried his devotion to the Almighty and love for all beings on numerous journeys through India and other parts of the world meeting many statesmen and high-ranking officials and social and humanitarian workers. Following Sri Mahaprabhuji's instructions, His Holiness founded several ashrams in Rajasthan and Gujarat, which are today spiritual centres much visited by spiritual seekers from all over the world. Kindled by the grace and the divine mercy of his Master, His Holiness helped people and inspired them in many ways. He worked actively for the wellbeing of the entire world through prayer and meditation.

In 1998 His Holiness was awarded with the title of Dharmchakravarti by the World Development Parliament in Haridwar and in 2001 with the spiritual title of Hindu Dharmsamrat by His Holiness Jagadguru Sri Shankaracharya Sri Swami Narendranandaji Sarasvati and the Vidvat Samaj (the assembly of professors and scholars of the Benares Sanskrit University) on the occasion of the Maha Kumbha Mela in Prayagraj, Allahabad.

His Holiness and his successor Paramhans Swami Maheshwaranandaji participated in numerous conferences as well as in important events that took place in the Om Vishwa Deep Gurukul Maheshwarananda Ashram, where His Holiness had lived for the last years of his life. Many holy men, spiritual leaders as well as world leaders, including Croatian President Stipe Mesic, visited him there to have his darshan. 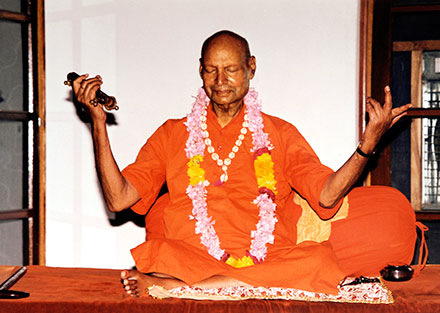 On 31 October 2003, His Holiness attained Mahasamadhi. He was laid to rest in the Om Vishwa Deep Gurukul Maheshwarananda Ashram, in the Village of Jadan, the Pali district according to the sannyasi tradition. Thousands of devotees paid their last respect to His Holiness during the traditional period of mourning.

His Holiness Paramhans Swami Madhavanandaji completely changed lives of many spiritual seekers through his inspiring messages and although he is no longer physically present, he encourages them to follow the spiritual path where the spiritual progress is measured with devotion to God, which is manifested through love for the whole of creation.