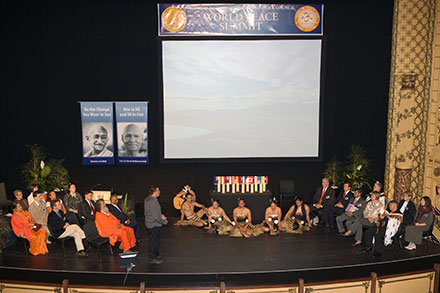 On March 28, 2008, the 7th World Peace Summit (titled “Climate Change – What to Do?”) was launched in Wellington/New Zealand, under the patronage of His Holiness Vishwaguru Mahamandaleshwar Paramhans Swami Maheshwarananda. It started with a traditional Maori opening ceremony and continued with a multicultural program. “There is only one human race, there are no differences, no races”, concluded His Holiness Swamiji at the end of the beautiful evening. 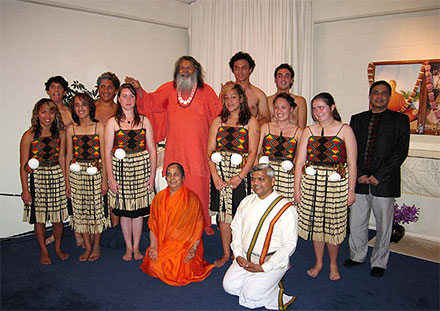 Prior to the Summit opening (March 26th, 2008) His Holiness Mahamandaleshwar Paramhans Swami Maheshwarananda planted a peace at Central Park with the Wellington Acting Mayor Ian McKennon.

A Totara tree was planted near the childrens’ playground and His Holiness said that “the Totara tree represents strength and power and standing tall in times of adversity, so when children play here they will be reminded of the dignity of the people of New Zealand who stand for world peace and sustainability”. 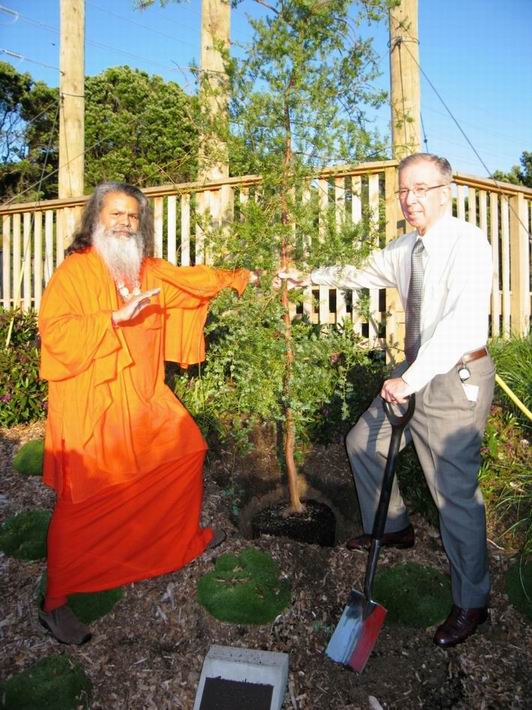 Mayor McKennon welcomed His Holiness to Wellington saying “it is an honour to meet someone who has devoted his life to peace and it is a great honour for Wellington to host the Sri Swami Madhavananda World Peace Summit, a conference devoted to international peace and reconciliation. The fact that so many of us are here today is an indication of how strongly we feel about creating harmony in the world. The Sri Swami Madhavananda World Peace Summit theme is climate change and Wellington is committed to sustainability. There will always be debate about how to achieve sustainability, but the main thing is that we have the realisation that we need to work towards it. There is no debate about the will to live in harmony, decency and respect with each other”.

The Summit's two-day program will cover the interconnectedness of our world, global and national factors creating climate change, the key issues for New Zealand - energy, agriculture, business, sustainable consumerism, and our role in the world, sustainable solutions at an international, national, local and personal level.

The World Peace Summit initiative is inspired by the message of Mahatma Ghandi to “be the change we want to see” and the message of one of the greatest spiritual luminaries from India whose message was “all in one, one in all”. The Summit is the initiative of His Holiness who is especially known for his tireless peace work of four decades. Other Summits have been held in Slovakia (2007), Slovenia (2006), Croatia (2005), Czech Republic (2004), Australia (2003), and Austria (2002), each attracting audiences of up to 5000 people.

At the conclusion of the Summit, all participants will be invited to sign an affirmative Declaration, which will be presented to the United Nations World Environment Day conference being held in Wellington on 8 June 2008.