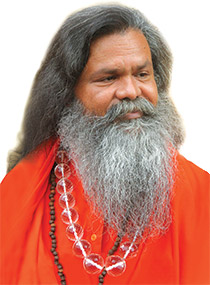 "The main commitment of humankind on this earth is to protect life in all forms and manifestations of existence. To realize this, it is necessary to adopt a different way of thinking and acting in every day life. It is important to introduce love, help, tolerance and understanding not only between individuals but among all nations, cultures, races and religions."

His Holiness Mahamandaleshwar Paramhans Swami Maheshwarananda, a founder of the Sri Swami Madhavananda World Peace Council came to Europe from Rajasthan, India, in 1972. Here he came to know the needs of modern man, which inspired him to combine the ancient yogic realizations and the findings of modern science with his rich experience. In this way he created an integral and internationally acclaimed system of practices called “Yoga in Daily Life”, which has spread from Europe throughout world, for the welfare of humankind and all living beings and has inspired hundreds of thousands people worldwide.

Especially during the communist era his spiritual and humanitarian work provided great moral support to the people of the Eastern European countries Czechoslovakia, Hungary and Yugoslavia. For his selfless efforts during nearly 20 years he received a letter of thanks by the President of the Czech Republic, Mr. Vaclav Havel. Croatian President Stipe Mesic acknowledged Swamiji's humanitarian service to Croatia over the last 30 years by awarding him the Order of the Croatian Star with the Effigy of Katarina Zrinska. 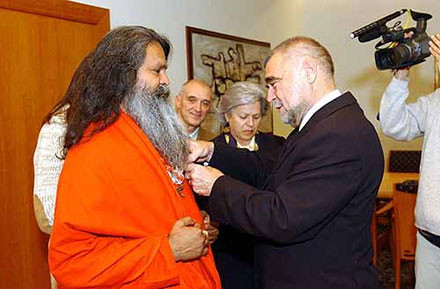 The President of Croatia, His Excellency Stjepan Mesic, has received a visit from Prof. Paramhans Swami Maheshwarananda and on this occasion has given him the decorative award of Danica Order of Croatia, with the image of Katarina Zrinska. This award is in recognition of Prof. Maheshwarananda’s lasting achievements in developing ecological awareness, peace and tolerance between cultures, nations and religions of the world.
2002 Zagreb, Croatia

Paramhans Swami Maheshwarananda's books and scriptures have been published in many languages (English, Hindi, German, Czech, Slovak, Croatian, Serbian, Slovenian, Hungarian, Spanish, French and Russian). His distinguished charitable, humanitarian, religious and environmental work as well as his untiring efforts for tolerance and world peace have been acknowledged by social, medical, religious and political dignitaries in different parts of the world.

Read more about Swamiji on
http://swami-maheshwarananda.org

Swamiji continuously contributes his efforts to peace, tolerance and understanding among nations in his numerous meetings with political leaders:

“My mission is to help people understand themselves, to understand others, to love and protect all living beings, and ultimately to realise God”.

Since time immemorial, holy man and spiritual masters have been dedicating themselves to preserving and spreading the divine message of yoga and spiritual Science for the wellbeing of humankind and for the whole globe. Similarly, Paramhans Swami Maheshwarananda comes from the spiritual lineage of great masters.

Sri Alakh Puriji who dwells in the Himalayas is one of the great Sidhas or Rishis from Satya Loka - the highest level of truth and reality. It is maintained that from time to time he manifests himself in physical form in order to preserve and foster the eternal spiritual values of Sanatan Dharma that helps us to understand our true and unique relationship with God.

Shivavatar Paramyogeshwar Sri Devpuriji is the successor of Sri Alakh Puriji and is an embodiment of Lord Shiva. He resided in Sikar District, Rajasthan from the beginning of 18th century till the middle of 19th century. His Ashram "Kailash" in the Rajasthan carries the same name as the holy Mount Kailash in the Himalayas, which is revered as the Abode of Lord Shiva. Sri Devpuriji is the Master of Sri Deep Narayan Mahaprabhuji and their divine presence was filled with divine bliss, unity and love.

Bhagwan Sri Deep Narayan Mahaprabhuji, the successor of Sri Devpuriji was a great and divine incarnation of love, mercy and wisdom, who lived from 1828 to 1963 in Rajasthan in north western India. "Love each and every living being at least as much as yourself" embodies the essence of his Golden Teachings for the whole of humankind. In 1963, Sri Mahaprabhuji entered into Mahasamadhi. His Ashram in Bari Khatu on the edge of the Thar-Desert has become a holy place of pilgrimage for spiritual seekers from all over the world, who imbibe his holy ever-present spirit.

Paramhans Sri Swami Madhavanandaji known as Holy Guruji was one of the rare spiritual Masters of the last century. He was the successor of Sri Deep Narayan Mahaprabhuji, who rendered him his spiritual heritage. Inspired by the grace and divine mercy of his Master, Paramhans Swami Madhavanandaji made his most earnest endevours to support the entire mankind through his teaching, prayer and meditation which greatly contributed to the protection of environment, education and anti-drug activities. In his whole life he spread the message of Sri Mahaprabhuji through the whole world and worked for the wellbeing of the entire world. He is the author of the biographies of Sri Mahaprabhuji and Sri Devpuriji that appeared under the title of "Lila Amrit". In 2003 Paramhans Sri Swami Madhavanandaji attained Mahasamadhi.