The one-day-event „Day of Non-Violence for World Peace“ that took place on Saturday, October the 2nd on the UN International Day of Peace was the highlight of the yoga retreat organized from September 24 till October 3 in the historical town of Umag, Croatia at the coast of the Mediterranean Sea.

Thousands of people from all of Croatia as well as from other European countries and representatives of USA, Australia and India accepted the invitation of the organisers – Sri Swami Madhavananda World Peace Council and The Croatian Association of Yoga in Daily Life – and came to Umag to reinforce the idea of peace, tolerance and non-violence as the only viable future of mankind. Through the web cast participants from more than 200 countries all over the world have joined the event.

The event consisted of three parts: dialogues on world peace (10:00am-12:00pm), planting of a World Peace Tree (centre of Umag, 12:30-1:30pm), a World Peace Prayer and candle lightening at the seashore and evening thoughts on peace (6:30-9:30pm).
The event started with Dialogues on the World Peace. 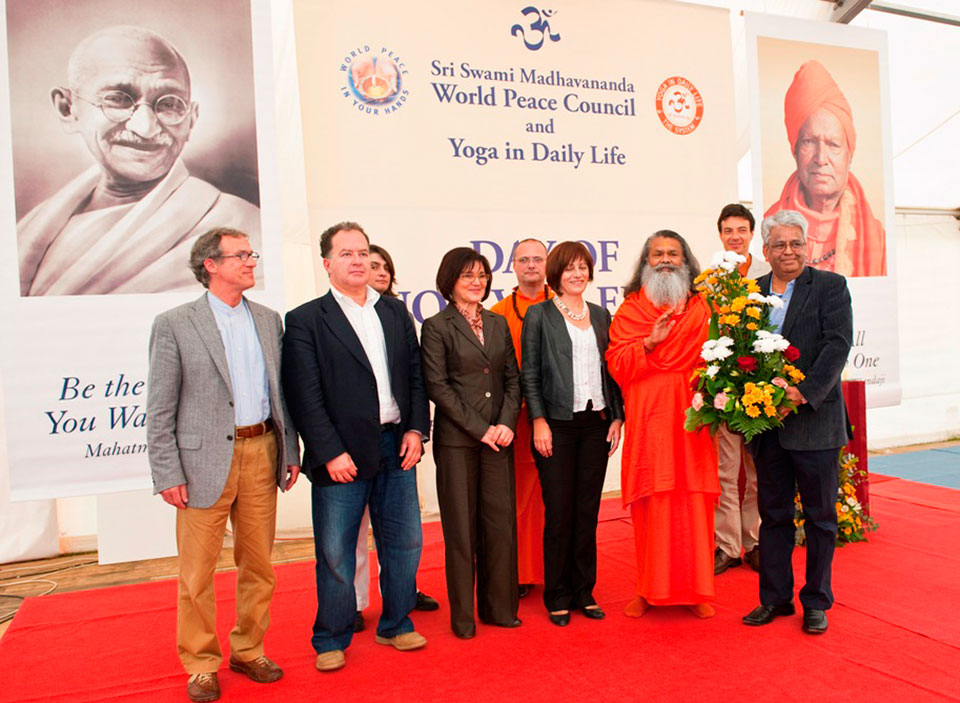 In his opening address, the initiator, His Holiness Mahamandaleshwar Paramhans Sri Swami Maheshwarananda stated: “I am very honoured that I can be with you on this auspicious day which is not only the day of non-violence but also the birthday of Mahatma Gandhi, the embodiment of non-violence. The term non-violence was used for the first time 7 thousand years ago by the great hero Bishma after the legendary Mahabharata battle. Having realised the extent of pain it had caused for the world Bhishma spoke to Yudhisthira: “Ahimsa paramo dharma” – the highest duty or highest religion is non-violence. Many saints and great sages of India have been spreading this message till the present days and now it is our turn to spread it further. Violence can be physical but can also be in mental, social or political form, it can target not only humans but also animals and the entire creation. Humans are born to protect and not to destroy; therefore we should decide and promise to ourselves today that no creature will suffer any more because of us. If we cannot dry somebody’s tears we should at least not be the cause for them.”

In the name of the patron of this event, the President of Croatia, dr. Ivo Josipovic, his Commissioner for Civil Society and Human Rights prof. dr. sc. Ankica Marinovic delivered a message of the President: “Through his Patronage the President appreciated your work for world peace and he is always going to support any organisations, associations and religious communities in their peace building initiatives. The care for cultivating peace and establishing mutual inter-religious acceptance is an important pillar of civil society and for mankind.”

“Already as a young boy I have learned that violence starts in the minds and thoughts of people, and therefore peace must start in our own hearts. Mahatma Gandhiji, whose birthday we are celebrating today, was the apostle of peace and as such recognised by the UN and international community. I am so happy that it is his birthday and his work we are celebrating today” stated the Indian Ambassador in Croatia His Excellency Pradeep Singh.

The Vice-President of Sri Swami Madhavananda World Peace Council dr. Dejan Dinevski remembered the first peace prayer in Umag 10 years ago, after which peace prayers all around the world organised by Sri Swami Madhavananda World Peace Council took place. „Our Council was established with the idea of promoting the dialogue, social health and world peace through humanitarian work, social events and initiatives such as peace summits and peace prayers in different parts of the world. Our first peace prayer took place right here, in Umag and therefore this place is of historical value for us.“

In that first prayer 10 years ago, the former Ambasador of Republic of Croatia to India, Mr. Dino Debeljuh participated who was present on this day again. He expressed his happiness that he could attend that historical event that have given him a significat support in his further spiritual path and search for the truth.

„Working for world peace is not only a duty of some smaller social groups but it should be a task for the whole mankind. If we want to realise world peace we have to be strong and Yoga in Daily Life teaches us how to get this strength“ said Swami Vivekpuri, President of the Croatian Association of Yoga in Daily Life, on behalf of the organisers.

The member of Sri Madhavananda World Peace Council and the representative of the Australian Association of Yoga in Daily Life with roster consultative status at the UN, dr. Aleksandra Vujić, referred to the message of the General Secretary of the UN, Ban Ki-moon for this Non-Violence Day, by recalling Mahatma Gandhi's citation that non-violence is the biggest strength of mankind.
After the peace dialogues, HH Swamiji, together with the Vice-Mayor of the city of Umag, Mr. Mauro Jurman and other distinguished guests, planted an olive tree as a living symbol of peace and non-violence in the centre of Umag. 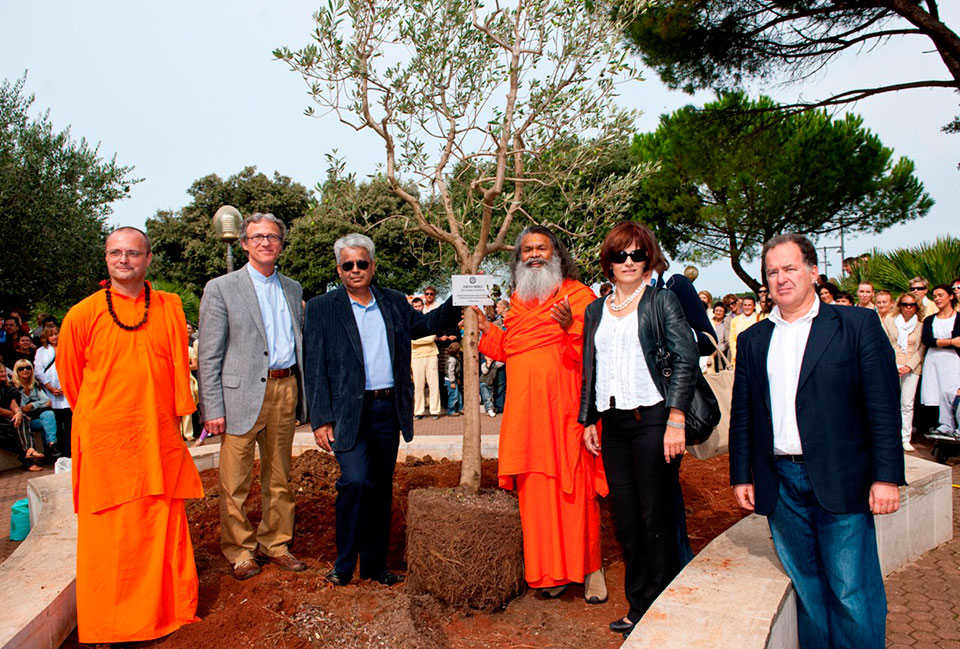 Planting an olive tree as a living symbol of peace and non-violence in the centre of Umag
October 2, 2010
You can view more images here

At sunset time hundreds and hundreds participants lighted candles and let them float into the sea with a peace prayer as symbols of peace that overcomes violence. 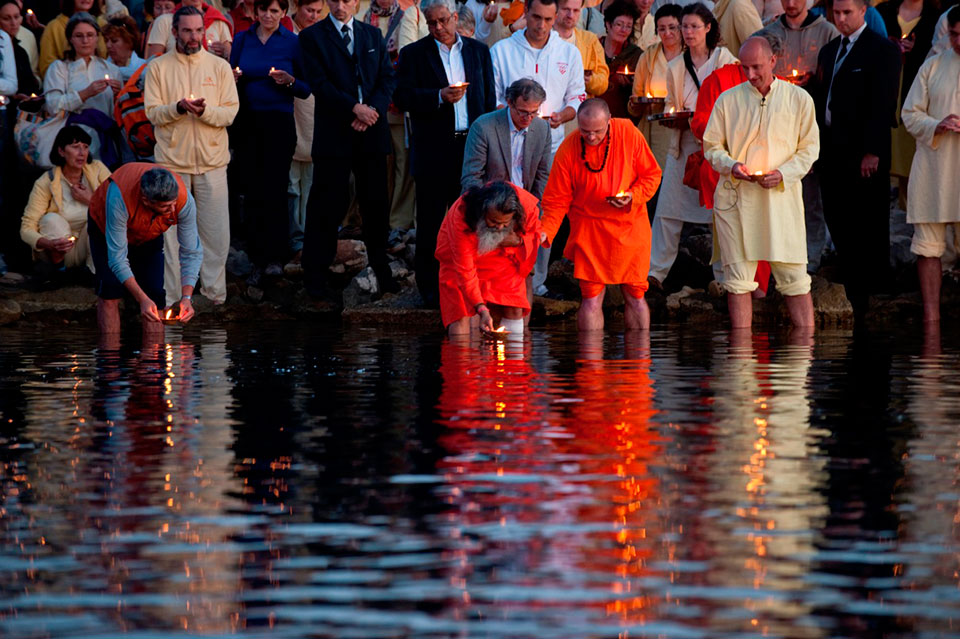 The evening finished with thoughts and reflections on peace given by His Holiness Mahamandaleshwar Paramhans Sri Swami Maheshwarananda. 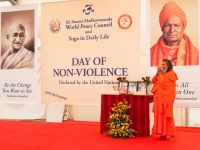 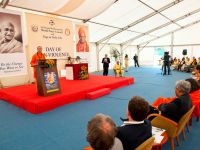 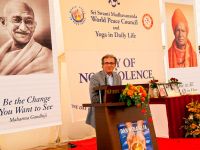 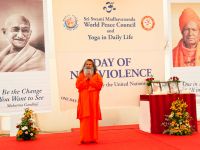 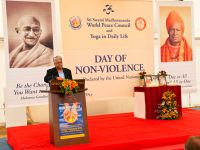 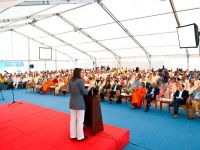 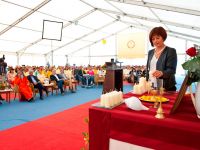 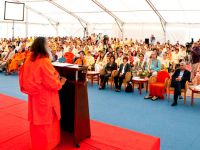 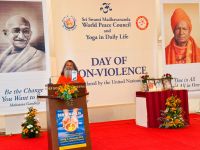