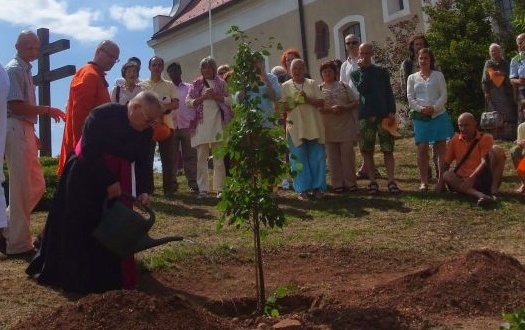 Saturday 5th of July 2014 was a day dedicated to peace and inter-religious tolerance in the small but beautiful historic towns of Balatonfüred and Paloznak, on the shore of Lake Balaton, Hungary.

After a short and pleasant meeting with town officials, Mahamandaleshwar Swami Vivek Puri warmly greeted citizens, guests and all who gathered on this occasion in the Balatonfüred city park. The park was named after the great Indian poet Rabindranath Tagore, who visited this small town in 1926. Remembering his great literal mark on this planet and his multicultural message to this part of the world, Swami Vivek Puri together with representatives of the town, honoured the statue of Rabindranath Tagore with flowers, doing so in the name of His Holiness Mahamandaleshwar Paramhans Swami Maheshwaranandaji and the Sri Swami Madhavananda World Peace Council.

The day continued in pleasant meetings in the Paloznak village, where Swami Vivek Puri met with the mayor of Poloznak and Father Jozef, priest from the local Catholic Church. After a ceremonial welcoming inside the 1000 year old church, Swami Vivek Puri and Father Jozef planted a World Peace Tree in the churchyard garden - an event shared with many local citizens and members of the Yoga in Daily Life Association of Hungary.