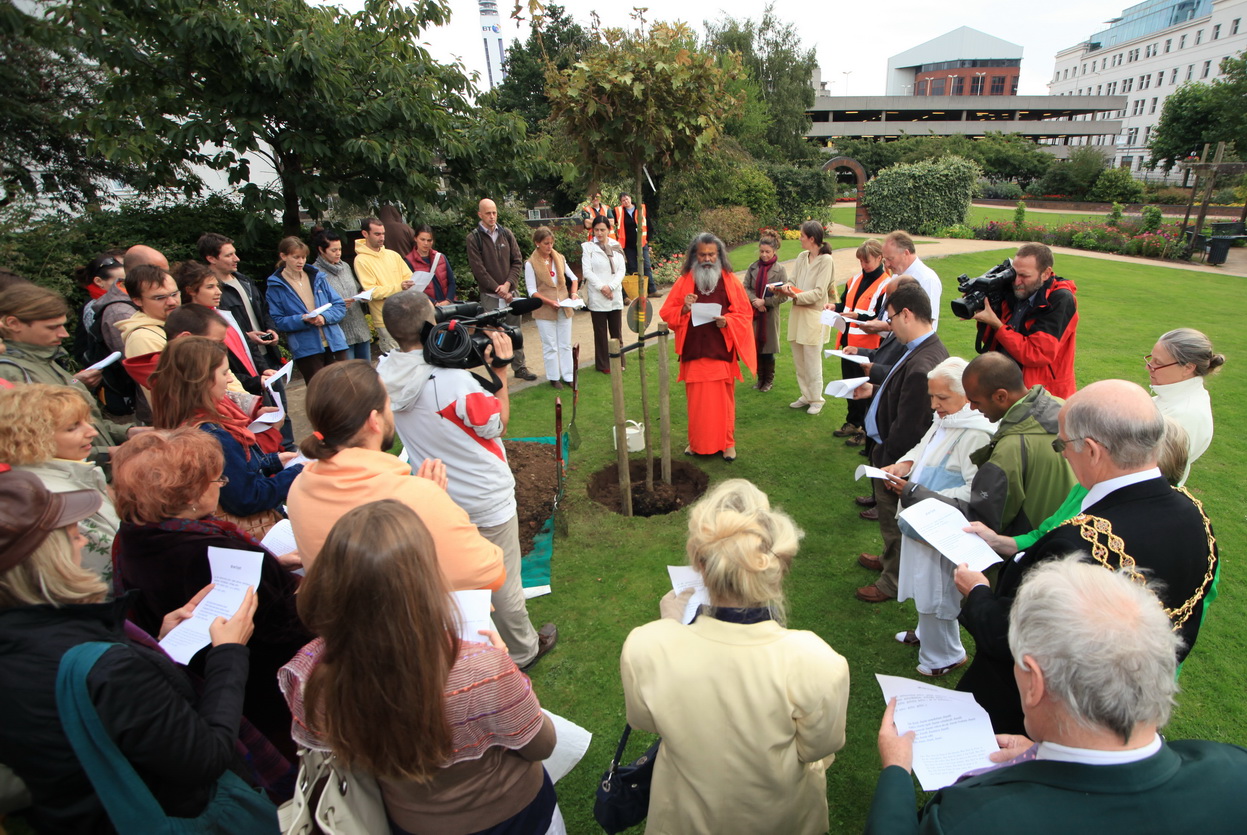 His Holiness Mahamandaleshwar Paramhans Swami Maheshwarananda, simply known as Swamiji, and The Lord Mayor of Brent, Councillor Len Gregory, together with the Lady Mayoress Mrs Gillian Gregory and other community representatives, planted a symbolic World Peace Tree on Monday 6 September, dedicated to the local Birmingham community. 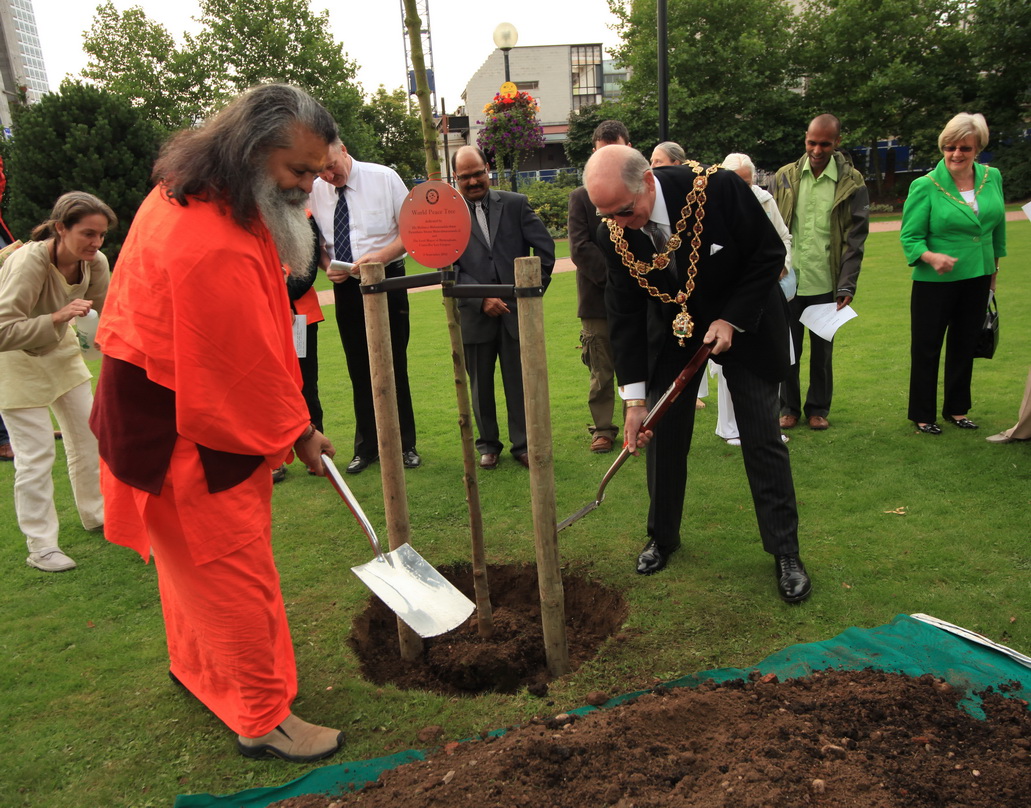 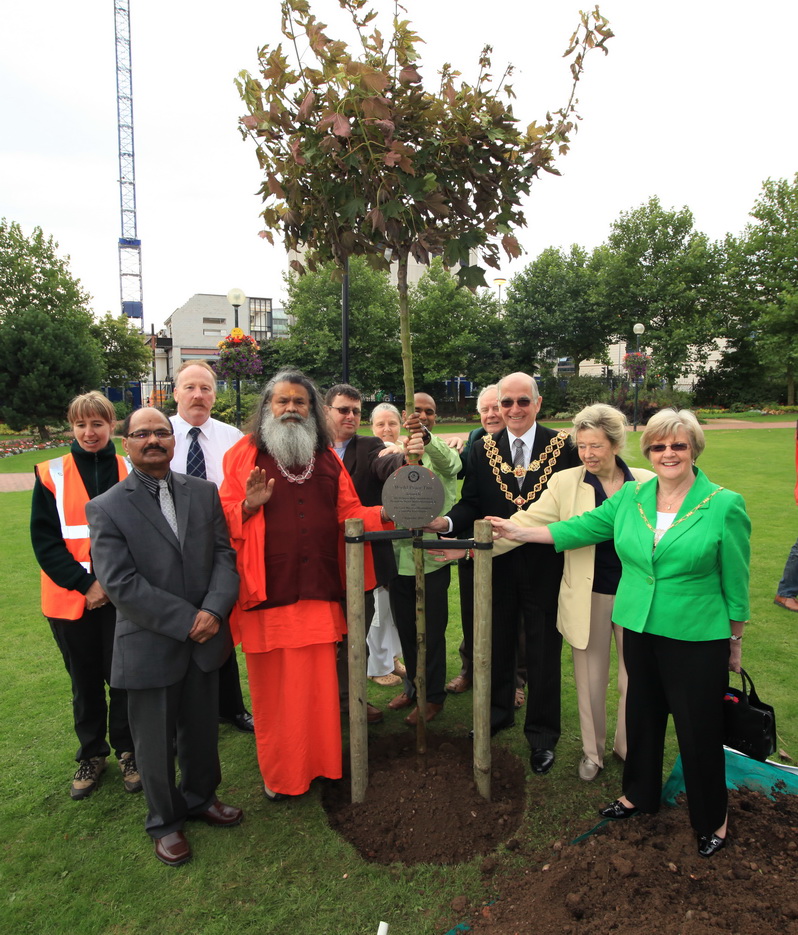 His Holiness Swamiji is the Founder of Yoga in Daily Life, the international charity dedicated to bringing the benefits of yoga to all, and the Sri Swami Madhavananda World Peace Council, based in Vienna, Austria. His Holiness gave lectures, guidance and inspiration on the theme of Meditation, at the local Birmingham branch of Yoga in Daily Life in the Jewellery Quarter, Mahaprabhu Deep Ashram, as part of his 2010 UK Tour from 1-9 September.

His Holiness Swamiji is recognised globally by thousands as one of the great Self-Realised Masters who has brought the ancient science of Yoga to the West. A humanitarian worker and tireless advocate of world peace, he has dedicated his whole life to serving humanity. His insight and understanding of the problems of modern society led him to create the unique and comprehensive system of Yoga called Yoga in Daily Life.

"The mightiest power in humans is the power of thought. Right now is time for us to apply our intellectual energy for the benefit of the world, rather than being the cause of its destruction. The path of Yoga helps us to unearth the valuable treasury of spiritual knowledge buried within and put it to good use. In this way each of us can contribute something worthwhile to the planet and its recovery." - Swamiji, Founder of Yoga in Daily Life.

The Lord Mayor of Birmingham, Councillor Len Gregory was an eager participant in this event, stating, "I am delighted to welcome Swamiji to Birmingham and welcome the planting of this Peace tree. Birmingham is proud of its diversity in cultures and faiths and we thank Swamiji and Yoga in Daily Life for this opportunity to plant this colourful tree as a symbol of lasting peace between all people of Birmingham."