World Peace Council: The most dangerous pollution is mental pollution

Gathering at United Nations to mark International Day of Non-Violence

Excerpts from a report by Katerina Vidner-Ferkov, Slovenia 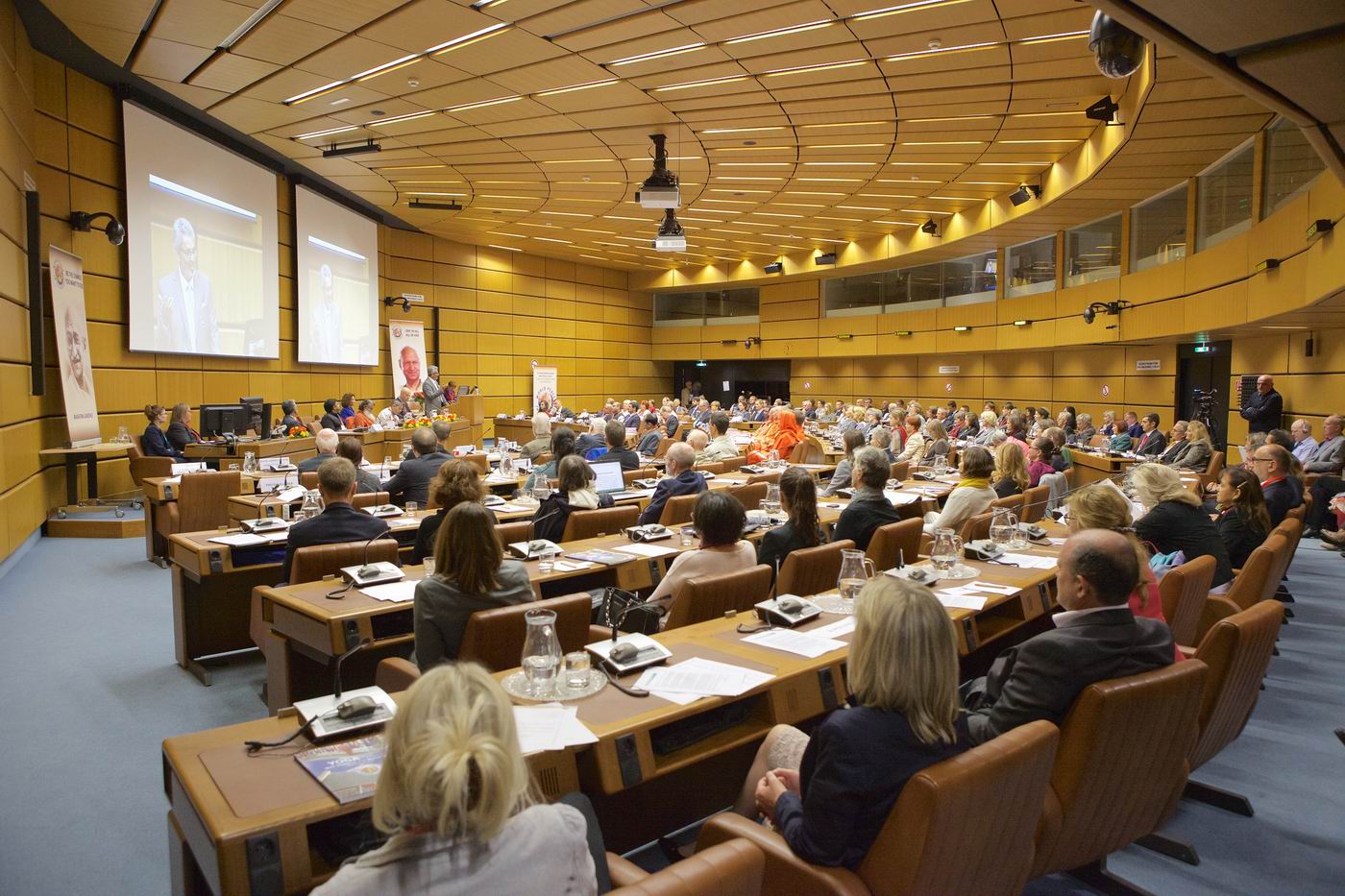 “When our children grow up they will ask us whether we knew where all this is taking us. They will demand answers,” HSH Prince Alfred of Liechtenstein, Chairman of the Advisory Board of the International Peace Foundation stated very directly, describing the seriousness of our present situation.

Prince Alfred also mentioned a story, which he had heard from native Americans. Their ancestors wanted to learn about the culture of the white man who came to them. Eventually they learned that the main preoccupation of the white man was dealing with paper items (money), and that they had no interest in nature.

“I myself have realized similar”, Prince Alfred added. “So we have done business out of love and respect”. In times of extreme violence against nature and between humans, he sees the solution in a completely new social agreement. 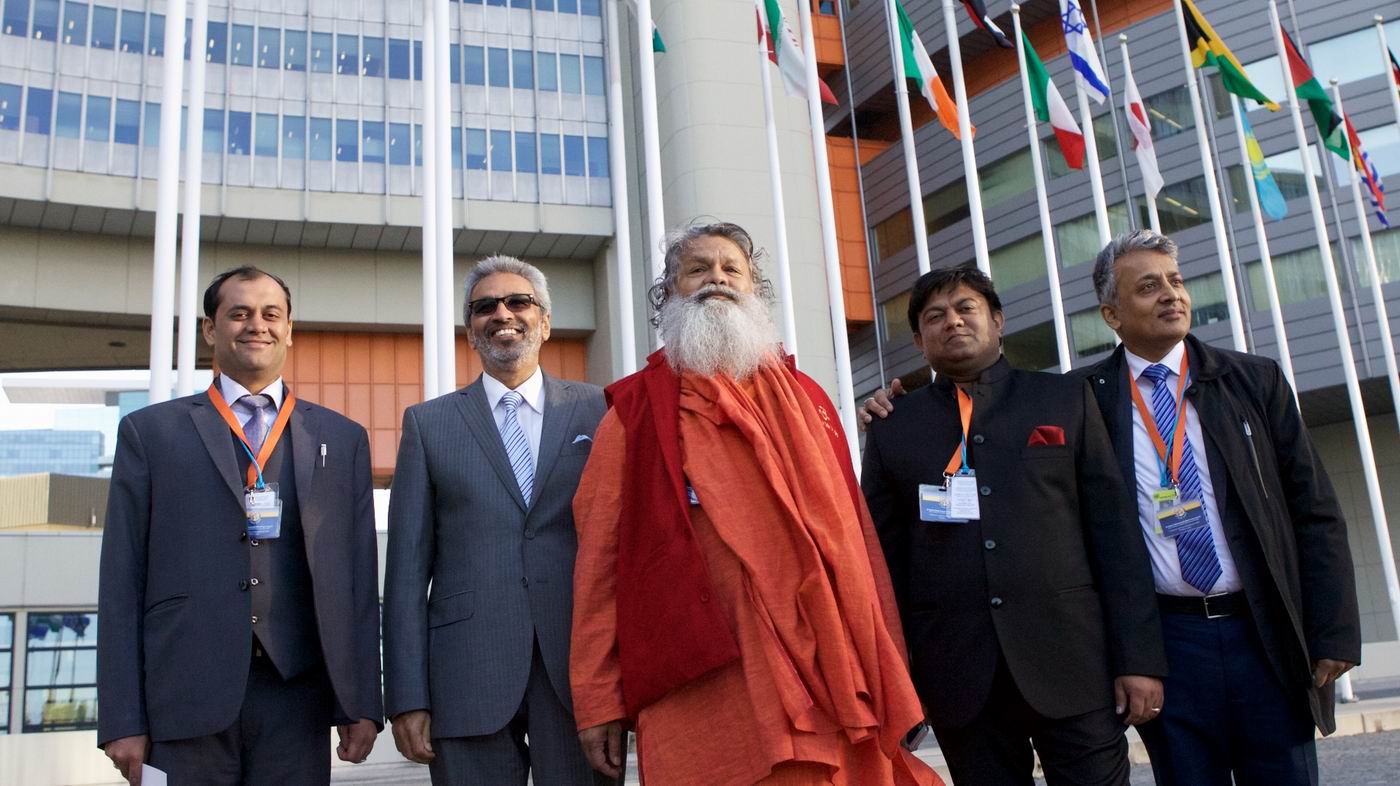 Greed and fear lead to violence

“Fear is that which is leading to violence”, said Dr. Klaus Renoldner, chair of the NGO Committee for Peace at the UN Vienna. He believes that disarmament of sides caught in conflict is important, but is still less important than preventing the culture of fear we live in: “Fear is growing due to the growing precipice between the rich and poor.”

World Peace Council founder, His Holiness Vishwaguruji Maheswarananda, declared that the most dangerous pollution is mental pollution starting with each individual: “The one who produces wars is also suffering due to its consequences”.

His Holiness surmised that our major trouble is greed: “In today’s situation with the refugees, the most distress encountered is the feelings of those who put personal possessions in first place. Gandhi said that Mother Nature has enough for everyone's need, but not to fulfill everyone's greed. As the age old wisdom of Yoga teaches, peace and happiness cannot be purchased at the market, but can be nurtured in oneself through effort and sacrifice. Yoga in Daily Life doesn’t mean only meditation, but rather open arms for all; and this demands an open consciousness.”

“Is it utopia for our life to become a yogi?” questioned Dr. H.R. Nagendra, director of Swami Vivekananda Yoga Anusandhana Samsthana University in Bangalore, high representative of Indian AYUSH Ministry and adviser to Prime Minister of India, Narendra Modi. Having formerly held the position of a research associate at NASA in the United States, he now deals intensively with the scientific research of Yoga. It has now been verified that Yoga balances the left and right hemispheres of the brain and indeed calms the mind: “which is essential for reducing the greed.” Dr. Nagendra also pointed out that the highest principle of Yoga is Ahimsa – to not harm or violate.

Dr. Bawa Jain, Secretary General of the World Council of Religious Leaders believes that religious leaders can contribute most towards world peace: “Their influence on the masses is beyond the influence of politics”. He mentioned Islam to be the world’s fastest growing religion and its essence to be non-violent: “The Muslim’s holy pilgrimage to the Hajj marks discipleship of the highest ethical principles, effectuated both by Mahatma Gandhi and Dr. Martin Luther King.”

Dr. Igor Lukšič, who was one of those awarded by Sri Swami Madhavananda World Peace Council as an Ambassador of Non-Violence and Peace, and Dr. Dragan Marušič attended the Vienna gathering from Slovenia. From Győr University in Hungary participated rector Dr. Péter Földesi; and from Charles University in Prague, Czech Republic, Dr. Jaroslav Vacek. Slovenian Prime Minister, Dr. Miro Cerar and former President of Croatia, Mr. Stjepan Mesic, both sent letters of support for the delegates' positive goals to manifest.

Mahamandaleshwar Swami Vivekpuri, representative of Yoga in Daily Life and President of Croatia Hindu Association, mentioned recent research which outlined that the world is not divided only into those who tend to move to the right and are very conservative and others who tend to move to left and are sceptical. There is still a sufficient share of those who above all strive for cooperation. The majority believe that there are only 2 per cent of people in this group, but in fact we are finding out there are at least 25 per cent of people like this. “Non-violence can prevail; we should never think there are not enough of us. Most important is persistence. Never give up,” he added optimistically.

Awards for Ambassador of Non-Violence and Peace