A representative of SSMWPC attended the program commemorating International Day of Non-Violence at the United Nations NY, organized by Permanent Mission of India to the UN. 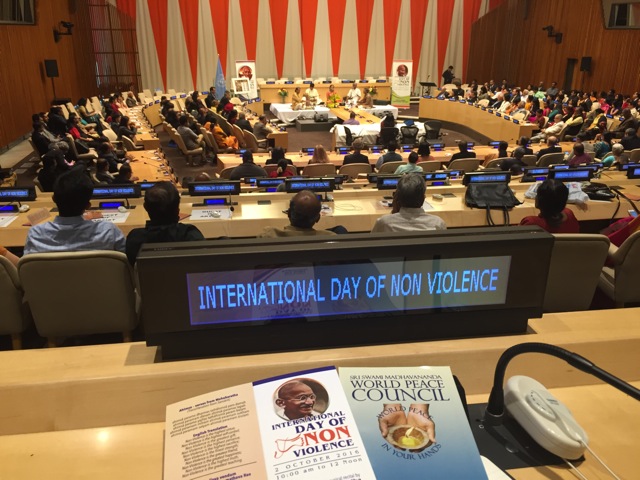 On 2nd October, a peaceful Sunday morning in New York, the headquarters of the United Nations was harmoniously resonating with chanting of the Peace Mantra, performed by Ms. Sudha Raghunathan, India’s leading contemporary Carnatic singer. With this invocation began the program commemorating International Day of Non-Violence and the birthday of Mahatma Gandhi.

In his welcoming remarks, UN Ambassador Mr. Syed Akbaruddin said: “We celebrate this day - the birth anniversary of Mahatma Gandhi - to uphold the eternal values of truth, non-violence, peace, tolerance and understanding.”

The program continued with the official delivery of India’s ratification of the Paris Agreement on Climate Change to the United Nations. The occasion for this act was chosen by Prime Minister Shri Narendra Modi to emphasize Gandhiji’s pioneering environmentalism and his simple, truthful, sustainable lifestyle, rooted in India’s Vedic tradition. Seven decades ago, Gandhiji encapsulated the essence of sustainability and our collective human dharma saying: “The earth, the air, the land and the water are not an inheritance from our forefathers, but a loan from our children. So we have to hand it over to them at least as it was handed over to us.”

With the inspiring remarks about Gandhiji’s legacy and the importance of non-violence in a world that is presently in desperate need of compassion, peace and environmental healing, the audience was addressed by the President of the General Assembly Mr. Peter Thomson; Deputy Secretary General Mr. Jan Eliasson; Finance Minister of Bangladesh Mr. Abul Maal A. Muhith; and Professor Barry L. Gan, Director of the Center for Non-Violence at St. Bonaventure University in New York.

Professor Gan emphasized in his speech that Gandhiji’s commitment to non-violence and compassion for all living beings was reflected in his vegetarian diet, which consisted mostly of nuts, fruits and leafy vegetables. He said that if we all follow Gandhiji’s example of a vegetarian diet, we will significantly reduce carbon emission and global warming.

Another important occasion commemorated in the program was the centennial birth anniversary of the legendary Indian musician and celebrated singer from the Carnatic music tradition, Dr. M.S. Subbulakshmi (1916-2004), and the fiftieth anniversary of her performance at the UN. For this occasion, a Commemorative UN Postage Stamp of M.S. Subbulakshmi was released. The program was filled with her music, masterfully performed by Mr. Raghunathan and four delightful accompanying musicians.

The Sri Swami Madhavananda World Peace Council is embodying the same values and principles of non-violence, compassion and high moral ethics championed by this commemoration. The Yoga in Daily Life international community, inspired and guided by HH Vishwaguru Paramhans Swami Maheshwarananda, is on the forefront of nonviolent transformation of the society by teaching and practicing of Yoga - a science for body, mind and soul - inspiring millions of people throughout the world to adopt a vegetarian diet and to live a compassionate, meaningful life in harmony with nature and in the service to all. 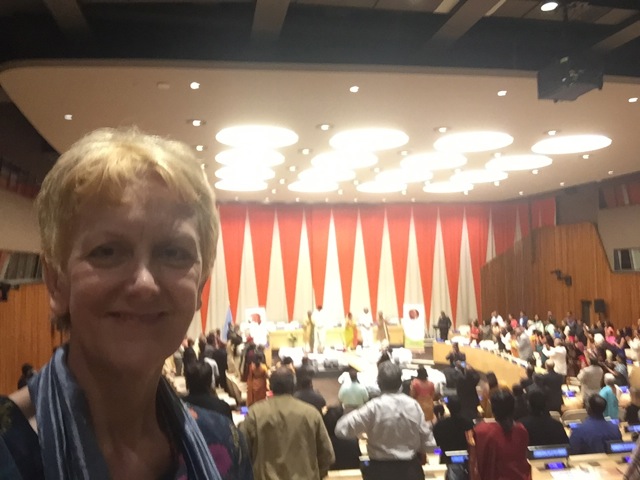