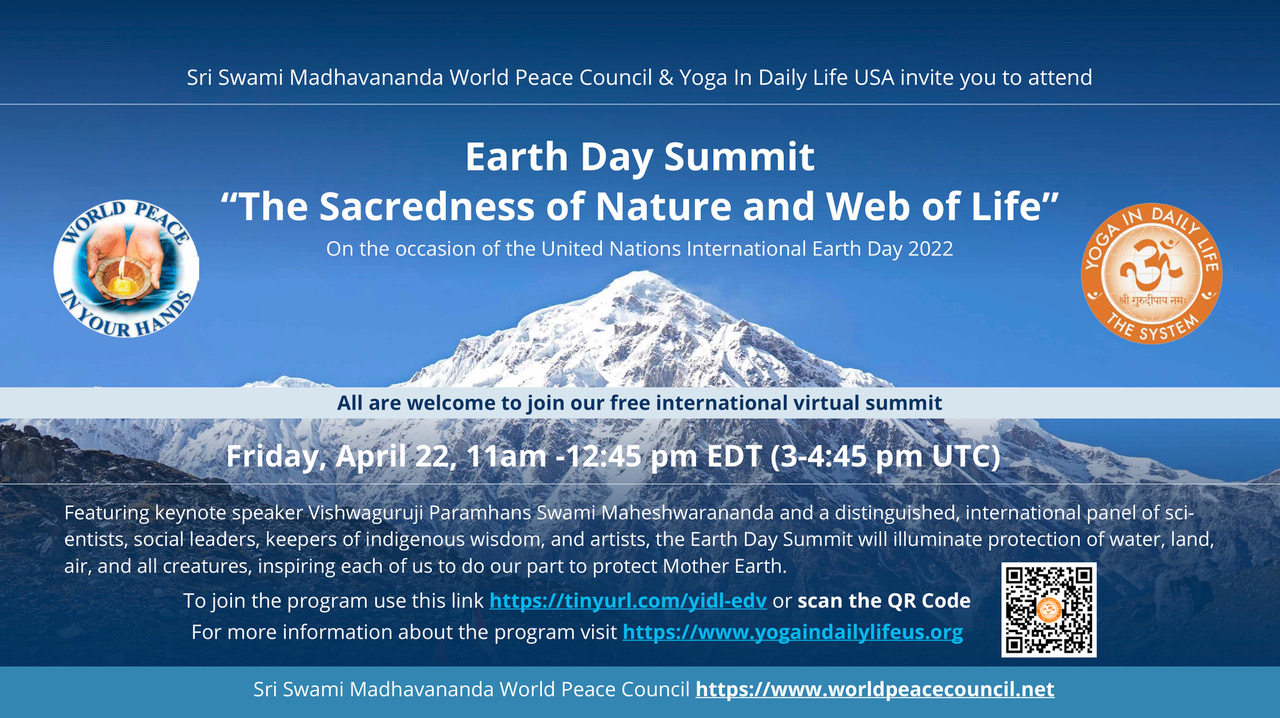 Earth Day Summit
'The Sacredness of Nature and Web of Life'

On the occasion of the United Nations International Earth Day 2022

We humans are blessed to call the beautiful planet Earth our home. We claim to be the most intelligent species. Yet we pollute our environment and recklessly exploit its natural resources, endangering our own survival.

“The worst kind of pollution is mental pollution,” says Vishwaguruji, founder of the Yoga in Daily Life System. Mental pollution is the cause of all other pollution. We have forgotten our ancestral wisdom, teaching us about the interconnectedness of all existence. The only way to change our actions is to change our mindset. Yoga in Daily Life offers practical tools for awakening human consciousness and taking responsibility for our actions.

Featuring keynote speaker Vishwaguruji Paramhans Swami Maheshwarananda and a distinguished, international panel of scientists, social leaders, keepers of indigenous wisdom, and artists, the Earth Day Summit will illuminate the protection of water, land, air, and all creatures, inspiring each of us to do our part in protecting Mother Earth.

2. Keynote Speaker
His Holiness Vishwaguru Mahamandaleshwar Paramhans Sri Swami Maheshwarananda Puriji
of Panchayati Maha Nirvani Akara, Founder of Yoga in Daily Life
Topic: Where There is Water, There is Life

4. Bawa Jain, Founder and President of The Center for Responsible Leadership
Topic: Environmental consciousness among spiritual, faith, and religious communities

HH Vishwaguru Paramhans Swami Maheshwarananda is a successor of the spiritual lineage of Sri Alakh Puri Siddha Peeth, author of the scientific system Yoga in Daily Life and founder of the Sri Swami Madhavananda World Peace Council. His Holiness, recipient of an Ambassador of Peace award, is originally from Rajasthan, India. From his base in Vienna, Austria since the 1970s, he has taught Yoga in Daily Life around the world where it is now practised in 27 countries.

Ramu Damodaran was the first Director of the United Nations Academic Impact, an initiative linking universities around the world with the United Nations. He has served in a number of other UN offices and with the government of India, where he was Executive Assistant to the Prime Minister. He has been a television news anchor, radio host, and freelance journalist, as well as President of the United Nations Staff Recreation Council.

Natasha Deganello Giraudie is a filmmaker and nature practice teacher specialising in stories that deepen our relationship with the Earth, drawing on her studies in Buddhism. She integrates learning from great naturalists of our time and from indigenous wisdom. Her most recent film, the award-winning “One Word Sawalmem,” which she directed with Michael “Pom” Preston of the Winnemem Wintu tribe of Mt. Shasta, has been selected for more than 40 festivals around the world.

Swami Madhuram Puri was born in Slovakia. He co-founded Yoga in Daily Life Ashrams in London, Birmingham and Edinburgh, and since 2012 has been based in the Sri Devpuruji Ashram in Raumati Beach, New Zealand. He plays Bansuri bamboo flute, records devotional songs (bhajans and kirtans), and music meditation music. In 2013 he was ordained as a sannyasi by his Master, Vishwaguruji.

Michael “Pom” Preston is a member of the Winnemem Wintu tribe, is the son of the tribal chief, and has been dancing in the Winnemem way since he was four years old. He works to protect sacred sites along the McCloud River, under threat of inundation from the Shasta Dam raise effort. He is featured in a documentary film, “One Word Sawalmem” (Water) which he co-directed with Natasha Deganello Giraudie.

Swami Yogesh Puri is a long-time devotee of Vishwaguruji and has lived and worked in India for more than twenty years. An architect, he leads the monumental project of building the OM Ashram in Jadan, Rajasthan. Originally from Slovenia, when on visits to his homeland, he presents lectures and workshops in various Yoga in Daily Life Centres across Europe.

Damijan Denac – Jaidev is Chief Executive Officer of DOPPS-BirdLife Slovenia, an NGO working in the public interest of nature conservation through research, management of nature reserves, and public engagement. He also serves as Assistant Professor at the Faculty of Natural Sciences and Mathematics in Maribor. Damijan has been a vegetarian and practitioner of Yoga in Daily Life since 1994. He became Vishwagurji's disciple in 1997.

Claudia Matejovsky – Muktamani is Managing Director of the Ayurveda Academy of Yoga in Daily Life, which she and her team established in 2004. She also is a Certified Yoga Teacher of the Yoga in Daily Life System. Since 2002, she has organised seminars, workshops and consultations with the famous Ayurvedic doctor Univ. Prof. Dr. S. P. Sardeshmukh from Pune, India

Khyati Rathore is a Climate Change Analyst at the World Bank. Previously, she was a Special Projects Manager with Defend Our Future, dedicated to empowering young people of all political persuasions who are interested in advancing climate and clean energy solutions. She was selected as a Climate Corps Fellow at the New York City Mayor's Office of Resiliency, continuing her work for protection of the environment.